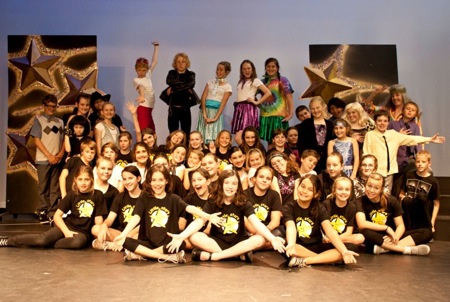 “I grew up in a household where our living room, spare room and every spare inch seemed strewn with home-made props, half-made costumes and strange people who burst into song seemingly, mid conversation.  Yes – my mother was a school HOD Theatre. And she loved doing the school musical.  I resolved to steer well clear of it all, but agreed to do the posters… fast forward to a career now spanning 35 years of publishing and producing. Along with a love of musical theatre, I learned a lot of practical things about what was, to a born organiser, very fulfilling – production.  School musicals are fun, and they are very ‘Doable’ – here are a few tips I picked up along the way.”  Gail Denver February 2015

Rule One – do not try to do it alone. Beg, plead, cajole or blackmail others to be involved. Putting on the school musical can seem a daunting task, even for experienced theatre teachers.

Form a Production Team, which besides making it easier, will make you feel less alone in decision-making. Your ideal team should consist of: a producer to pull your team together, director, musical director, set designers, sound/lights tech team, overseer for set construction, costume person and advertising/media whiz.

Determine responsibilities and a time frame. You’ll need between two to three months from start to production.

Consider the student talent (or otherwise) you have to work with.

Musical and play publishers normally supply materials on perusal, (Free samples link here) allowing you to read/listen whilst envisioning your students in the roles.

A perennial problem for theatre production is the lack of males. Generally speaking, five or six girls for each male will be the audition ratio. So choose material that will give girls something worthwhile to do, instead of lumping them in the Chorus! Read the script and the cast list to assess the quality and length of role for each character.

Don’t choose scripts that list characters as (horror of horrors!) ‘Girl/Boy 1’ – it doesn’t inspire a student or give them their own special character to work on.

Your musical director needs to hear and see the music for titles under consideration, and once you are agreed, run it by your team. If generally acceptable, arrange now for the purchase of scripts and music and apply for your license to perform.

Rather than read the whole play at auditions, select relevant scenes that will give an indication of the students ability and flexibility.

It’s unwise to choose students who have other commitments that will prevent them from attending rehearsals – no matter how good they are. You need 100% commitment and enthusiasm.

The audition process may take several sessions, that should be held along with the music auditions, so that the two directors can confer.

Don’t put a good actor in a singing role if he sings like a dugong, and conversely don’t use a singer who is a wooden actor!

Remember to call for back-stage and front-of-house volunteers early.

Once your musical is cast, give out your rehearsal/performance schedule before starting rehearsals.

Send the schedule home to parents as soon as you have them, with a note asking for their co-operation in ensuring that their child will attend each rehearsal. It is essential to seek parental support for their child’s involvement.

Get your schedule out early – and stick to it! If you have called a rehearsal for Act Two, Scene Three – do it. Establish early in rehearsals that these are work sessions, as  disruptive forces can set your production back considerably. Self-discipline should be expected early, and does not lessen the enjoyment.

Cover what you’ve planned, don’t be side-tracked. This is not the time to discuss lighting, set etc. Be tough about people missing rehearsals! Poorly attended rehearsals demoralise people who are there.

Design the rehearsal schedule so that only those required need attend specific rehearsals. Having cast members sitting around for long periods waiting to do their lines is time-wasting, boring for them – and they can become disruptive.

Start by learning the songs first, as this interests and revs up the cast, and allows them to feel familiar with something as they begin to learn their spoken lines. It also means your band (if using one) is starting work immediately.

It is a good strategy to call the Chorus first and work on the music. Always make the Chorus feel important and make rehearsals fun for them by giving them plenty to do. It’s pretty boring being in a Chorus that is required to walk on, sing a backing for a song and then walk off again. If possible, bring a specialist in to work with them …. perhaps a choreographer to make them feel important. Constantly stress that a good musical rests on the shoulders of a good Chorus!

Use lunch breaks effectively. Often a song and/or dance routine can be learned in this time. It is a good time to rehearse any romantic scenes, that young actors are reluctant to do in front of their peers until they feel comfortable with the scene.

Every minute counts at rehearsals so use them wisely. Don’t be lulled into a feeling of security because production is seemingly miles away. It never is.

Make sure that the rehearsal schedule is marked ‘books down’ at least two weeks before the show. This is when the exciting developments begin!

Introduce your stage manager to the cast well before performances and let them know that he/she is in complete charge of whatever happens on the set or backstage after the performance season begins.

Give yourself long enough rehearsal periods. Half an hour or less usually accomplishes nothing unless it is a special rehearsal to polish a small segment. Out of school rehearsals should be at least one and a half to two hours.

Get the rehearsal CD straight away, even if you have a rehearsal pianist. You’ll need it for your choreographer and for use in rehearsals. Maverick Musical’s copying fee allows you to make copies – send these home with your leads so they can practice further. This is especially confidence-building for solos.

Supply forms (with the rehearsal schedules) that require the character /s measurements asap, and pass on to your costume department as soon as rehearsals begin.

Ask parents for help, particularly with Chorus costumes. They are more inclined to help if you send material home that is cut out ready for sewing.

Scour your local Op Shops – you’d be amazed at what can be adapted and bought cheaply!

The costumes need to be ready at minimum a week or so before performance, to allow for additions or alterations. If the costumes for your musical are not contemporary clothes, give out bits and pieces of costume early so the cast gets used to wearing something a little more exotic. This applies particularly to period dramas or musicals with themes such as space or clowning etc.

Sets are often the last item to be made. Your arts team often like to see a show in certain colours and this may influence the colours of the costumes.

Make sure that the cast know the positioning of each set and give them an improvised stage set so they are used to moving around it.

It is important that actors get used to using any hand-props that are used in the show. If they have yet to be constructed, improvise so that they are part of the rehearsal procedure.

If you are using mikes other than radio mikes, organise their set up early in rehearsals as actors have to familiarise themselves with their positioning and usage. If none are available for earlier rehearsals, again improvise.

Involve the school film and television unit, if you have one, for appropriate special on-stage effects – make a film of some rehearsals and upload snippets to your school FB page.

Start the advertising campaign three weeks before the show.

Create an ‘event’ on social media and encourage everyone in the cast and crew to like and share – upload fun rehearsal shots, but not too many!

Flood the area with posters and try for a spot on local radio. Community newspapers are often supportive and will carry editorial and promote it if you have good pictures of cast members.

High School students may like to do some street theatre (under supervision) where they can hand out leaflets, in costume. Many shopping centres are happy for schools to showcase some of the music/singing/dancing from their shows.

Constantly remind the school of the forthcoming production via your social media pages, websites and newsletters.

Offer a prize to the student in the show who sells the most tickets.

Always endeavour to have a ‘preview’ afternoon which is, in fact, another valuable dress rehearsal; this time with an audience. Primary schools are usually happy to see your High School production, and other Primary Schools and Pre-schools love to see the Primary School’s offering. You may consider inviting senior citizens to the preview – but don’t be surprised if they talk louder than the actors!

The cast needs their director to be there each performance. You need to boost up their energy and confidence levels prior to each show! In particular, the second night is traditionally flatter than opening night, so you will have to ‘rev them up’ up a bit. An energetic cast produces a much livelier performance.

Ask the Stage Manager to put in a report detailing any problems encountered, and to make suggestions regarding the smooth running of any future shows.

No matter how amiable you are feeling towards the cast, never, never, never, attend a cast party if held at the home of a student! What you may see there, you may later be required to explain…

Have a thank-you meeting for the cast and everyone involved, including front-of-house and back-stage workers. This can be a special lunch.

Have an informal meeting with your team and stage manager to discuss the production. Consider all the positive aspects and any problems that can be avoided next time.

Have a short break, then start looking for a suitable show for next year!

Putting on the school musical is a bit like child-birth, and when you get it right, you forget the pain and recall only the joy – and find yourself doing it all over again!